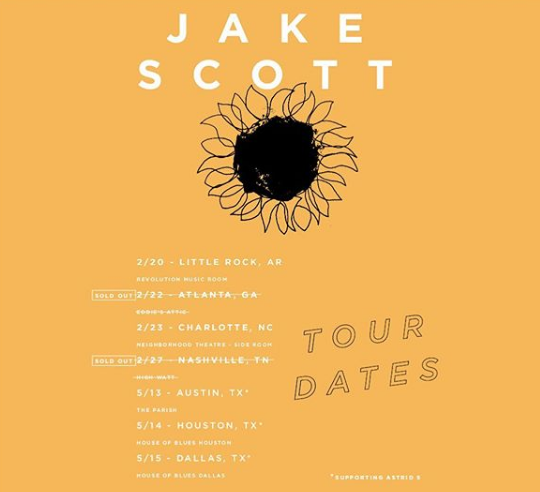 Singer-Songwriter Jake Scott followed a slew of new single releases  over the last six months by embarking on a U.S. tour. This February Jake will began the first leg of his tour by making stops in Little Rock, Charlotte and two sold out shows, one in Atlanta and the other in Nashville. On the second leg of his tour, which will pick up back in May, Jake will be playing shows in Austin, Houston & Dallas.

Jake has been steadily building a large fan base & has seen it grow significantly in the last year. Much of the recent buzz surrounding him stems from popular co-writes with artists such as Katelyn Tarver & Brigetta as well as making an appearance on NBC’s Songland last summer. Jake & Katelyn Tarver also performed together on stage at the historic Troubadour in Hollywood last Fall. Before kicking off his Winter tour Jake peaked his fan anticipation for his upcoming shows by performing at the Sundance Film Festival and shortly after, in the midst of all the hype, he released his newest single “Maybe”.

In 2019 Jake amassed over 20 million streams on Spotify in over 70 different countries throughout the world. He’s now headlining the majority of dates on his tour with two nights already sold-out. In March, Jake has been busy performing for his fans from his home via Instagram TV amidst the stay-at-home quarantine; delighting his fan base by playing his most popular songs as well as some unreleased music including his upcoming single “Like No One Does” which is set to be released in early Spring.