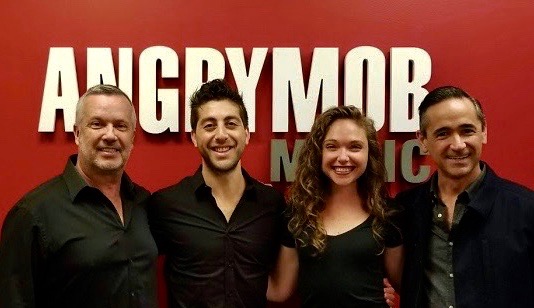 Angry Mob Music has signed an exclusive worldwide co-publishing agreement with LA-based songwriting/production team Schmarx & Savvy, consisting of Marc Schneider & Savvy Giersch. The agreement covers all new works from the versatile power duo who have had much success collaborating with multiple artists and songwriters in various genres.

Their first debut as artists came in 2018 with the single “Human To Love” & in 2019 they released their second single, “Somebody Real”, a tech-house song layered with infectious vocals, pounding beats & cool grooves authentic to their overall style as songwriters. Other forthcoming releases this year include a new single with Corey Pieper, and cuts by Kyle Lionheart, Stealing Oceans, Jordin Sparks and Marlhy, among others.

“We could not be more thrilled to be working with Schmarx & Savvy at this moment in their careers,” says Marc Caruso, CEO of Angry Mob. “Their talent, creativity and work ethic overflow into everything that they touch. They truly embody what Angry Mob values in songwriters and producers, and we are so excited that they chose to partner with us in helping them achieve the goals they have set for themselves.”

“I have helped Schmarx & Savvy develop a solid catalogue of new songs over the last year,” said Schmarx & Savvy’s manager, Patrick Conseil. “They are so hard working, prolific, and versatile. They bring such great energy and talent to every room. I feel Angry Mob Music is the right home for them as they share our vision for what success looks like. We look forward to achieving great things together.”