This month’s post features an artist spotlight on indie rock band, Sleeplust. Sleeplust is the brain child of twin brothers Michael and Joseph Pepe and vocalist Amber Ruthe. Moody electronics, spacious guitars, bombastic drums, and hip hop influenced rhythms all make up the ground work of the band. They’re currently in a Worldwide Publishing deal with Angry Mob Music and since had features in Billboard Magazine and Huffington Post. Sleeplust has had TV placements on channels such as MTV, VH1, and E! Entertainment along with an accumulation of over a million plays on their last 2 Ep’s on digital platforms. 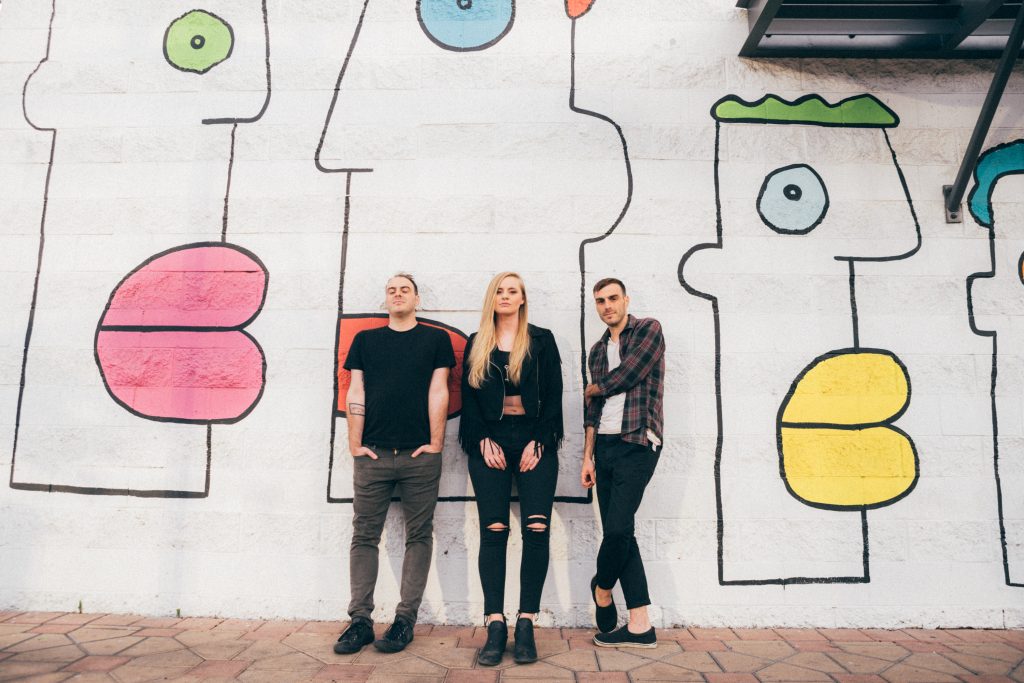 1. Where did your love and passion for music come from?

J: Honestly I couldn’t tell you, no one in Mike and I’s family is musical! I remember when I was about 13 getting really into music and finding new artists and from there it progressed into me playing and writing songs and it honestly has never stopped since then.

A: My parents were young and in their early 20’s when they had me. They were music enthusiasts. Since I was a small child, I’ve always been able to learn the words and melody to a song only after hearing it for a second time. When I got a little older, I bought my very first guitar and became obsessed. The rest is history.

M: This is always such a great question because I really feel like this side of the business often time sort of finds you. I remember in the late 90’s falling in love with rock and punk music and wanted to learn more about the genres. Not just how to play the songs but how the records were made, where they were made, with who they were made, how the songs became and finally how a record like that is actually finished. Through that I started my love affair with not just physically playing the guitar but the recording studio, gear, producing and mixing and finally the act of songwriting. Bands like Third Eye Blind, Blink-182, The Ramones, Rancid, Smash Mouth, Sex Pistols, were all such different bands in the same general ‘rock’ genre. It fascinated me how different they all sounded and they all individually resonated with me for different reasons, especially how different their records were made but objectively they were all fantastic.

J: Playing the songs for people and seeing the reactions of the crowd serves a few purposes for me. For one, I just absolutely love playing live music and it feels like the ultimate pay off after honing in and writing/producing the songs for lengthy amounts of time. But also it’s a good gauge of which songs are connecting and where to help us better during the writing process.

A: It’s an insane adrenaline rush from all of the energy on the stage and from the crowd. Personally, I black out and give my everything to the show, leaving it all on stage. It’s a privilege to be able to share what we do with people who care. That small portion of time is pure magic.

M: Live shows for me are a ball of excitement, anxiety, networking and fun. All of those elements I think are a recipe for a good show.

3. Describe the creative flow when you jump into a writing session, what is it like?

J: Usually it starts with one of us bringing in a chord progression or a small demo idea! Melody is usually always king in our world so we flesh that out first over some chords then start thinking about the direction of the song both lyrically and production wise.

A: It’s honestly different every. single. time. With that being said, it’s such an exciting process because you never know what you’re going to come out with in the end. It also depends on the energy and emotion of the song.

M: When I’m starting a writing session, it’s radically different than when I’m starting a recording or mix session. The vibe is all about groundwork and initial creation. Later is when I’ll go through full production, recording, etc. and going through it with a fine tooth comb. The writing process are lots of ideas being thrown out into the studio at once with hopes it’ll convene in the right form to create something that wasn’t there when we started. Very often I’ll bring in an idea I have started on. Usually for me that looks like a chord progression, a guitar riff or a melody and we use that as a jumping off point. Typically it ends up sounding unalike to the original idea but the point of the initial idea is to simply get the ideas flowing and use it as a foundation to sort ideas off of.

4. What’s some advice you would give to other aspiring songwriters?

J: Write what’s honest to you, then good things will come. If you’re trying to conform to a sound or image that you think industry people or the public want, you’ll be chasing your tail. Also the best advice I ever got: You don’t ask, you don’t get.

A: Patience with yourself. Persistence. Resiliency. Speak up. If you never ask, the answer is always a no.

M: Write A LOT of songs. I mean A LOT. Write 100 and then pick 10 you like and then make the 10 better. Then write 50 more and choose 5 and do the same thing. Practice letting go of ideas and not getting too hung up on any one of them until the feeling strikes that it’s worth chasing. You have to learn how to trust your intuition and your taste. Those are the elements that cannot be taught and if you can harness that trust within yourself, you’ll inherently know when an idea is right. To start, you have to write a ton of ideas to practice that trust. Once you trust yourself, you have to write a lot to get to the core of what you’re trying to achieve in a song. Also remember there’s no perfect song and the best thing you can do is a write more songs.

5. What are your favorite albums of all time?

J: I have so many favorite albums because I listen to so many genres. Even though it’s way before my time, The Cure’s Disintegration is the album I credit for changing my life, so I’m going to go  with that!

A: Any Paramore album!!

M: This is a TOUGH question haha. If I HAD to choose, which in this case it seems like I do, I would say Disintegration by The Cure. They’re my favorite band of all time and that record has always spoken to me.