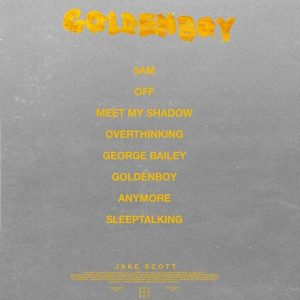 Jake Scott’s newest EP, Goldenboy, tells an eight-song musical story of the singer-songwriter’s quarantine journey of self-reflection and soul-searching. Scott provided insight into Goldenboy’s meaning and creation in an Instagram caption posted shortly after the EP’s release; here, he revealed a part of his personality he calls Goldenboy, who constantly transformed to win the affections of those nearby.  This realization prompted Scott to reassess his life and confront that part of himself.

Scott begins his Goldenboy story with the incredibly raw “5 am,” an acoustic ballad that tells listeners what to expect from this heavy, emotional EP. After this opening, “Off” introduces Scott’s mindset surrounding Goldenboy: “Would you be here in the morning if I let the lights turn out / Would you be disappointed if you saw through my facade.” Scott shows tremendous vulnerability and honesty in revealing his fear that people will leave him or view him differently if he lets down Goldenboy’s walls and shows his true self.

The EP then moves from this self-reflection into a new stage of confrontation. “George Bailey” relays Scott’s life assessment, and he uses It’s a Wonderful Life’s character as a springboard. Scott draws parallels between Bailey’s life and his own experiences to convey a breaking point of his own in which he realizes he cannot continue to allow Goldenboy to dictate his life decisions. The song “Goldenboy” continues this sentiment, as Scott lays his heart on the line with the record’s anthem “Always been who I should be for the sake of somebody else / And I can’t carry all this weight. Scott lightens this emotional heaviness with the next song “Anymore,” in which he sings “I don’t need you anymore.” This brings the story to a close as Scott optimistically lets go of Goldenboy and prepares to start his new life with his genuine personality.

The album has already amassed millions of streams since it’s release. Scott also partnered with GrubHub to offer Goldenboy dounuts that campaigned simultaneously with the release of his EP Goldenboy. Scott plans on recording and releasing more music throughout the year.