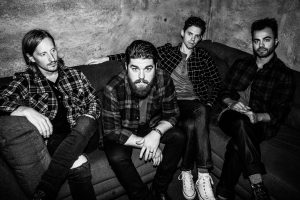 While volunteering at an Arkansas thrift shop, founding members and brothers, Boots (bass/guitar/vocals) and Cobo (drums) Copeland, stumbled upon a 1970s yearbook with the most rock n’ roll looking dude they’d ever seen, Knox Hamilton. At that moment, the brothers along with Brad Pierce (keys) and Drew Buffington (guitar) had found their identity.

The quirky band name was also an emblematic way to capture their idiosyncratic sound – songs with modest southern roots that soar to modern, ethereal heights free of boundaries or borders.  Boots and Cobo understood the power of song and it’s ability to change a mood, lift people up or inspire them. “It always struck me how a song or a melody could impact your state of mind,” says Boots. “And as we began to write music, I realized I never wanted to feed a bad moment, but rather foster a good one. I’d rather make people dance than cry. Life is filled with problems and rainy days – I’d rather Knox Hamilton ease that dreariness than indulge in it.”

Their first single “Work It Out” gained notoriety by racking up more than 3 million streams and the #1 spot on Sirius XM’s Alt Nation. The band continues to tour with past appearances at SXSW, Bonnaroo, Firefly Festival and a nationwide tour with label mates Grizfolk.