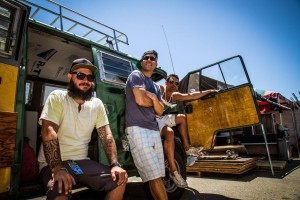 In Hawaiian culture, “ohana” means family, a word that practically defines Pepper and makes a very fitting title for the trio’s social following.

Formed in Kailua-Kona, Hawaii by Kaleo Wassman, Bret Bollinger and Yesod Williams, the now California-based trio relied on their longtime friendship and creative partnership to self-produce and record their eighth studio LP ‘Ohana’ in their newly established Kona Inn Recording Studio in Redondo Beach. With ‘Ohana’, Pepper was able to bridge their past with their future. The first single, “Vacation”, bassist Bret Bollinger describes as “…if James Brown and The Beach Boys got together and had way too many Mai Tai’s”. In 2019 they released their ninth studio LP ‘Local Motion’, which featured the popular single “Warning” featuring Stick Figure. The album debuted #1 on Billboards reggae album chart & further established Pepper as a leader in their genre.