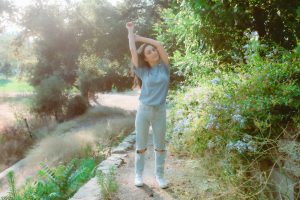 LeyeT (Angela Mukul) is an LA based artist and songwriter specializing in the pop, alternative, R&B, and electronic genres; she’s known for her smart yet relatable lyricism and infectious melodies.

In 2020, she penned and featured on, “Carefree”, one of the focus tracks off RAC’s BOY album, and contributed to Molly Moore’s debut album, Voice on the Internet (Get Out Of My Head).

A dedicated writer, she’s constantly creating for herself and others. As an artist, LeyeT has garnered a solid foundation by amassing 10M+ streams across platforms, releasing two EPs, thoughts and more thoughts, which have landed on such playlists as Spotify New Music Friday, Young & Free and Today at Apple while also landing notable sync placements on Freeform’s Good Trouble and The Bold Type.

LeyeT (Angela Mukul) has also helped to cultivate and grow a community of songwriters called Los Angeles Songwriters Collective (LASC). LASC’s purpose is to be a healthy resource and thriving community for songwriters along their journey in music. Within this community, she’s taken it a step further to develop a new chapter LAS(she) with the aim to empower, educate and foster a community of female creators specifically.

Listen to some of her collaborations here: