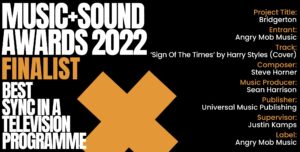 The annual MASA (Music + Sound Awards) announced their finalists this Fall and Angry Mob Music was among the nominees for “Best Sync In A Television Programme” for the work that composer Steve Horner and producer Sean Harrison did on the orchestral cover of the Harry Styles’ song “Sign Of The Times”. The song was featured in an episode from the second season of the widely popular Netflix serious, Bridgerton. The song was one of eight covers from the album Parallel Lines that was released in January 2022 by Steve Horner. Other songs on the album include: “Diamonds” by Rihanna, “You Should See Me In A Crown” by Billie Eilish and “Royals” by Lorde. Since the episode aired the cover of “Sign Of The Times” has since amassed over 10million streams to date.

The concept for Parallel Lines originally stemmed from popular sync trends revolving around orchestral and string cover renditions of top 40 songs popularized in soundtracks for shows such as Bridgerton. Justin Kamps, the music supervisor for the show, worked in close collaboration with Steve and Sean to create music that could be used for the show as well as create opportunities for placements in new spinoffs of the show in the works that will rely heavily on the same type of soundtrack. After the success of Parallel Lines, Steve Horner and Sean Harrison, with help from others including music supervisor Justin Kamps, are set to release a new album in 2023 titled String Theory, which will feature all new orchestral covers of popular songs.