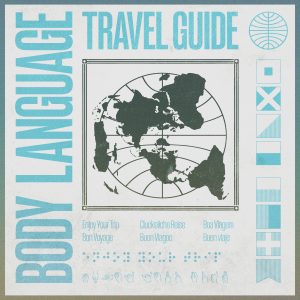 Travel Guide is the groups third LP to date and the first album since 2016’s Mythos. Angela Bess, Grant Wheeler, Matt Young and Ian Chang, better known as the alt-electronic group Body Language, is known for their alternative electro-pop sound.  Since their inception in 2008, the band has been known for their restless pop experiments with a future-shocked blend of soul and R&B. On their 2013 sophomore release, Grammar, Body Language dug deep into electronic pop territory and garnered the hit ‘Well Absolutely’ that went on to be featured in an advertising campaign for Lord & Taylor and earned multiple placements with HBO, Google and LG plus noteworthy support from Sirius XM. Their 2016 follow up release Mythos, continued to showcase their intimate music with lyrics of longing, desire and lost love.  Oftentimes dark and moody, Mythos pushed forth feelings of desire against ominous backdrops only to quickly veer back into the familiar and comforting.

Their new LP, Travel Guide, chronicles an itinerary in route through ten tracks of genre-bent psychedelic R&B.  From writing the record on both coasts to slowly spreading themselves out beyond the limits of Brooklyn, NY, distance and wayfaring seems to hold no water to their force as writers, as they triumphantly deem this record to be their most collaborative effort yet. Leading up to the official release of the new LP, the group released several singles to support the album including, “Whenever I Think Of You”, “Boomerang” and “Perfection” which helped provide a catalyst for the groups most adhesive sounding album to date. On Travel Guide the group effortlessly blends elements of R&B, electronic, psychedelic and pop music condensed into a ten song album that is absolute ear candy.