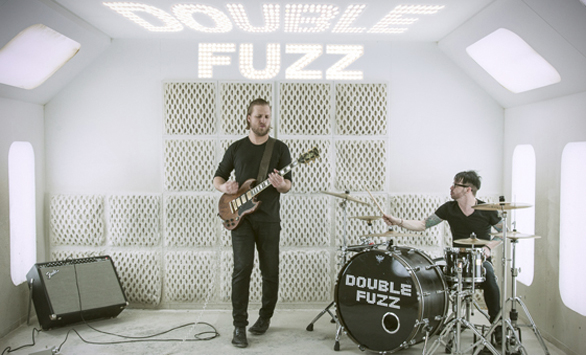 Double Fuzz is a lot of band. Jon Whitehead and Harvey Warren both bring a sound larger then what you would expect possible from a two piece-band. As a two-piece band, the temptation is to err on the side of scrappy garage grit, but Double Fuzz dig deep and blow their sound up to far larger proportions than their lineup would otherwise suggest. The stage sags underneath Whitehead’s three daisy-chained amps swelling his guitar attack while Warren drives the metronome forward with dizzying force, pounding out the enormous rhythm with deceptive ease. Their riff-driven sound howls and snarls a confident swagger, as if the duo were a pair of caged animals looking for a release, all cock and strut.

Formed in the summer of 2010, the two members of Double Fuzz, Jon Whitehead (vocals / guitar) and Harvey Warren met while working in a Calgary restaurant and shortly thereafter began creating their original material. Quickly catching the attention of local venue owners and fans alike, Double Fuzz have gained early success in Calgary, Winners of local radio station X929’s coveted Xposure contest and a 2012 WCMA (Western Canadian Music Awards) nomination for Rock Album of the Year. The Duo Has Been Playing Across Canada in Festivals such as NXNE (North by Northeast), Canadian Music Week, and Sled Island.