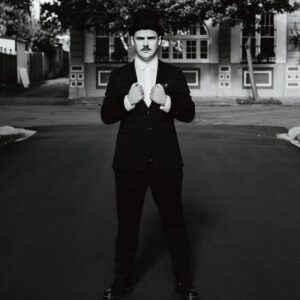 Just A Gent is the moniker of Australian based electronic music producer Jacob Grant. A self taught, electronic music prodigy, Jacob landed a set at the Listen Out festival at the tender age of 16, which kicked off a career-shaping couple of years that saw him remixing artists like Alison Wonderland, Peking Duk and ZHU.

Since then he’s amassed a huge following with his impressive catalog of original works and signature remixes that took Australian radio by storm, having several hit records on high rotation with over 300 million streams to his credit. One of Australia’s most consistently great electronic producers,

Just A Gent’s music has received support by the largest names in electronic dance music including Skrillex, Diplo, Dillon Francis, What So Not, and more.

Having ridden a wave of global success with four groundbreaking EP’s, JAG released his debut album project, Planet Oasis, in Spring of 2022. He’s excited to share what he considers to be some of his most refined songs and sounds to date, once again showcasing his imaginative talents in the EDM space.

Listen to Just A Gent: