The rock n’ roll duo, Migrant Motel, performed on two separate stages at this year’s Lollapalooza. Originally, the band only planned on performing at the BMI stage Thursday night, but were asked at the last minute to also perform earlier that afternoon at the Toyota Music Den. Both shows went very well and the duo couldn’t have been happier with how they performed, and the feedback they received from the crowd.

Led by the charismatic singer/bass player, David Stewart Jr., the band rolled through dual 30 min sets that featured some of their most popular songs that got the crowd off their feet and their hands in the air. “It was magical,” said Stewart Jr. after the performance at the BMI stage.

After being postponed in 2020 due to the Covid pandemic, Lollapalooza marched on this year at its usual destination at Grant Park in Chicago, IL. The event spanned over the course of four days and also featured artists such as Tyler The Creator, Megan Thee Stallion, Miley Cyrus, Post Malone, and Modest Mouse. 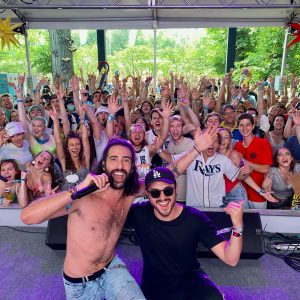 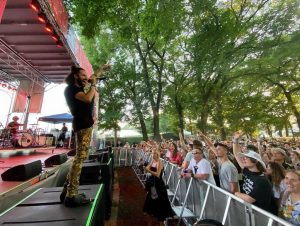