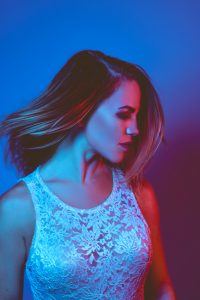 Singer and songwriter Natalie Major translates raw emotion and relatable experiences into anthemic and ambitious pop punctuated by down-tempo beats, skyscraper-size vocals, and unabashed and cathartic honesty. After moving to L.A. to pursue a lifelong musical dream back in 2014, the artist bubbled up with a series of high-profile songwriting placements and vocal spots. Among those, Natalie penned and featured on Bobby Puma’s “Someone Somewhere,” and Tiësto included the track’s “Tiësto Edit” on the fourth installment of his popular Club Life series: Club Life, Vol. 4 – New York City. “Someone Somewhere” peaked in the Top 5 of Beatport’s Top 100 and landed on Spotify’s Global Viral Top 50.

Next, the songstress teamed up with Dutch sensation Showtek and Brooks for “On Our Own,” which clocked over 11.2 million Spotify streams in under six months. Meanwhile, 2K tapped her to sing the “Star Spangled Banner” and Canadian National Anthem for both NBA 2K15 and NBA 2K16. By 2017, her cumulative streams would exceed 20 million and counting. However, audiences get to finally experience her vision in 2018.

She first struck a balance between “beauty and melancholy” on 2017’s “Human” in collaboration with Robot Koch. It quickly crossed the 100k mark on Spotify. Natalie kicked off the new year with “Waves.” Receiving its premiere in the Freeform series grown-ish, the single ebbs and flows between breathy verses and a seismic and soaring chorus that’s as empowering as it is entrancing. Since then Natalie has released a 7 song EP called “The Moon” in early 2020.