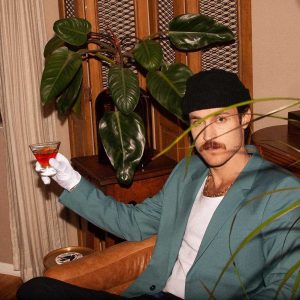 teeballpaul is the side project of LA based producer/songwriter Paul Gutierrez. His debut single “Thank You For Consideration” was released in January 2021. The song is reminiscent of the Disco style-era featuring pulsating bass grooves, soaring synth lines and catchy sugar coated hooks.

Throughout 2020, teeballpaul was busy working on his music while also establishing his newly found artist persona on social media. With his tongue-in-cheek humor and his refined dapper style, he’s created quite a buzz among his social media followers, fellow musicians, and artists alike. Paul also filmed and starred in two hilariously witty short films that take aim at the imperfections of the music industry, titled “Thank You For Consideration Pt. 1” and “Thank You For Consideration Pt. 2”. Both of which he posted on his Instagram and YouTube pages just days prior to the release of his debut single. To top it all off, teeballpaul released the lyric video for his single which showcases his unprecedented style and killer dance moves.

We’re anticipating more to come from teeballpaul in the not-so-distant future, but in the meantime check out his IG page @teeballpaul for a deeper glimpse into the artist and listen to his debut single “Thank You For Consideration” below.