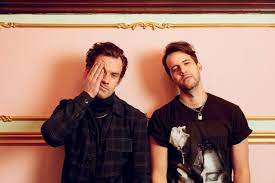 ROMES is a Canadian indie-pop duo from Toronto. Made up of brothers Jacob and Nicolas Bitove, they formed the group in 2015, along with Irish friends James Tebbitt and Andrew Keyes. ROMES released their debut EP titled BELIEVE on April 8, 2016 and later released their debut, self-titled full-length studio album ROMES on October 6, 2017. Both the EP and album were produced and mixed by acclaimed, Grammy-nominated, L.A. producer Tony Hoffer (Beck, M83, Phoenix and The Kooks).

The band has received positive acclaim from critics and artists alike including Irish artist, Hozier, who endorsed their debut album by saying, “So thrilled ROMES have released their debut EP. First releases are rarely this strong.”.  The band has been nominated for multiple awards in their short tenure such as Best New Group/Artist at the 2018 Canadian Radio Music Awards and New Touring Artist of the Year at Canadian Live Music Awards 2018. Their  single “All The Time” has been added to numerous streaming playlists on Spotify and Apple Music including: Hype Machine, Fresh Finds, and Fresh Finds Pop. Their single “Drinking On My Own” was also featured on Spotify’s New Music Friday US, Canada, and Global playlists along with the Indie Pop & Chill, It’s a Bop and Soda editorial playlists. Apple Music also included the single on their New Music Daily, New in Alternative, New in Pop, and Pop Deluxe playlists.

ROMES’ have also landed mentionable sync placements including HBO Max’s Genera+ion, Press Play, and the upcoming Mindy Kaling series. As well as the popular the widely popular video game, EA Sports Madden NFL, and have had success in sports campaigns ads for the NBA and MLB. The band will release the anticipated EP “My Demons Are My Best Friends” in the Summer 2021 which include the lead singles “A Little” and “Fever”.