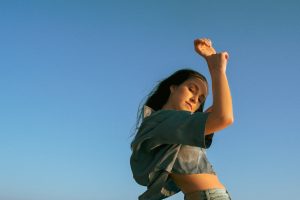 LeyeT Is an LA based artist and songwriter specializing in pop, alternative, R&B, and electronic genres; she’s known for her smart yet relatable lyricism and infectious melodies. A dedicated writer, she’s constantly creating for herself and others. In 2020, she penned and featured on, “Carefree”, one of the focus tracks off RAC’s album, Boy. She also contributed to Molly Moore’s debut album, Voice On The Internet (Get Out Of My Head).

As an artist, LeyeT has garnered a solid foundation by amassing 8M+ streams across platforms, releasing two EP’s: Thoughts and More Thoughts, which have landed on such playlists as Spotify’s New Music Friday, Young & Free, and Today At Apple, while also landing notable sync placements on the series, Good Trouble and The Bold Type. From lyrical themes that inspire deeper thought, to her ambiguous name, it’s not enough to simply be, to live unchallenged.  “In my songwriting and who I am as an artist, I want to provoke listeners to think about something,” she says, “A light does that. It helps someone see”.

With new releases slated for 2021, as both an artist and a contributor to outside projects, LeyeT is determined to anchor herself as a creator who connects with audiences far and wide, spreading a dose of optimism along the way.