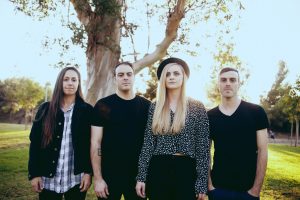 Sleeplust is the brain child of twin brothers Michael and Joseph Pepe, vocalist Amber Ruthe, and drummer Sarah Luffred after a chance encounter on Craigslist. Moody electronics, spacious guitars, bombastic drums and a steady rhythm all make up the ground work of the band. Since releasing their music, they have been featured in Billboard Magazine, Huffington Post, along with numerous TV placements on channels such as MTV, VH1, and E! In addition to their most recent EP “Silent Panic”, their last two albums have accumulated over a million streams across digital platforms.