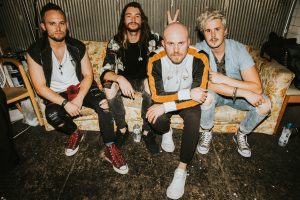 Alt-rock band, Foreign Figures, has signed an exclusive worldwide admin deal with AMM. The band consisting of members, Steve Michels, Johnny T, EJ Michels, and Seth 78, are Utah natives and first debuted their sound with the six track EP “Overzealous” in 2018. Known for their charismatic live performances in venues all around Utah, they’ve shared the stage with the likes of other popular alt-rock groups such as X Ambassadors, Lukas Graham, Kesha, and American Authors.

Their second EP “Everything Is Never As It Seems” was released in the Spring of 2019 after they wrapped up a successful West Coast tour. The album garnered positive reviews from music critics including Alternative Press magazine. All the while Foreign Figures built a large fan base and racked up millions of streams.

Throughout much of 2020 and early 2021 members of the band continued to write and release more music under their own names but still remained intact as a group while they prepare to record their new album dropping sometime in 2021. Under the terms of the deal, AMM will provide worldwide publishing and master administration services.